Complete your Roanoke Island experience by enjoying the food, beer, and spirits of the British Isles right here where it all began.

In the late 1500s, the first English colony in "The New World" was established on the north end of Roanoke Island.  Delayed by the war with Spain, an English resupply ship arrived to find that the colony had vanished without a trace.  The fate of the "Lost Colony" of Roanoke remains a mystery to this very day, and has become known as "America's Oldest Mystery."

At Lost Colony Tavern, we're bringing the flavors of the Old World to the Outer Banks with British-style beers made with ingredients imported from the United Kingdom and Republic of Ireland, traditional British Isles dishes, and a Signature Cocktails program centered around Irish Whiskeys, Scotch Whiskeys, and London Dry Gins.

In addition to our British dishes, we also offer a selection of dishes featuring fresh local seafood exclusively sourced from Roanoke Island waters: Pamlico Sound Blue Crab picked and cleaned in neighboring Hyde County along with Greentail Shrimp and a rotating daily selection of indigenous fish from the Port of Wanchese on the south side of Roanoke Island.

Lost Colony Tavern is located at the corner of Queen Elizabeth Avenue and Sir Walter Raleigh Street at the very center of Manteo's bustling downtown "walking waterfront" peppered with many unique shops and popular attractions such as the historic Pioneer Theater, Roanoke Marshes Light and the Elizabeth II, a representational ship inspired by one of seven English merchant vessels from the Roanoke Voyage of 1585.

Dine inside the tavern or outside under shady umbrellas in our British-style beer garden.  Let us transport you "across the pond" with our beer, food and cocktails from the British Isles to the Barrier Islands! 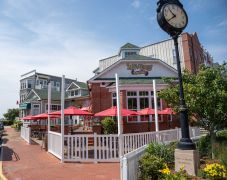 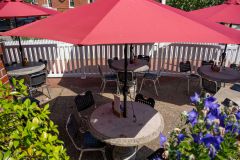 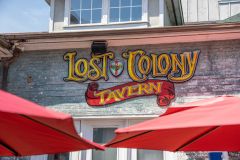 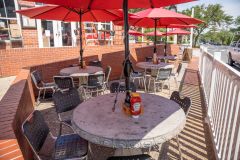 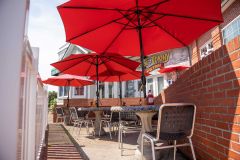